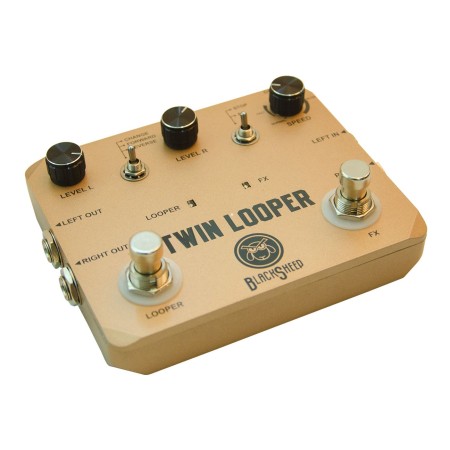 The Twin Looper is a simple to use, yet highly sophisticated pedal that allows you to create layered loops with twin stereo tracks that can be used for backing tracks, overdubs, effects, or structuring complex individual performances. Dedicated controls allow you to control your tone with ease, letting your creativity flow.

Rec/Play/Overdub
Creating loops couldn't be easier, simply press the Looper footswitch once and play your riff to record it, press the switch again to play the loop, then press a third time to create an overdub - it's as easy as that. When you want to Undo or Redo any parts, just press and hold down the switch and replay your part. Hitting the switch twice stops the loop. With the loop stopped, by pressing and holding the Looper switch, the loop will be cleared and ready for you to start over.

Stop / FX modes
The FX switch has two modes, Stop and FX - which can be selected using the Stop/FX toggle switch. In Stop mode, the FX button simply needs to be pressed once to stop the loop, and then held down to clear the loop. This allows rapid loop changes to be made on the fly, which is perfect for keeping live performances punchy and tight. In FX mode, the button activates/deactivates the internal Speed effect, whilst the corresponding Speed knob can be used to affect change on the loop.

USB Connectivity
As well as having stereo inputs and outputs, the Twin Looper is also equipped with a USB connection, which allows you to connect the pedal directly to your computer and import/export loops or record into your DAW of choice.

The Black Sheep Twin Looper Pedal is a solidly built unit, which allows you to create incredibly complex layered loops with minimum effort - a must have piece of kit that should be part of every guitarist's pedalboard.